This page pays tribute to Eastern's 2019 South Jersey Group 4 girls
soccer championship. It includes photos, a story, lineup and opponents/results . . .
Back to the beginning . . . Click here for pics from a practice on Aug. 15.
**Bottom of page: Group and All-South Jersey selections by the
Camden Courier-Post. 1985-forward.**
--
To provide additions/corrections:tedtee307@yahoo.com.
Thanks!

Eastern for the first time since its 2016 triumph, but this time there was no upset. The Vikings cruised to a 3-0 win over the
Mariners for the program’s second consecutive sectional title.   “It just shows how much we work and how much we want it,”
said senior captain Sara Brocious, another Viking who played in the 2016 sectional final loss. “In July, we start coming out to
this field every day and we always have the same goal in mind, remembering our losses, but in every game we win, we
celebrate together.”
Eastern has done a ton of celebrating in 2019. The team’s sectional final victory was the team’s 42nd win a row dating back
to Oct. 4, 2018 and improved its 2019 record to 25-0. Eastern has also been ranked by USA Today and Top Drawer Soccer
as the No. 1 team in the country for much of the season. Despite these accolades, the Vikings haven’t taken their eyes off the
ultimate prize of a second consecutive state championship.
“They honestly don’t talk about it,” head coach Jamie McGroarty said of the team’s high ranking and undefeated record.
“They’ve been very focused, they’re game-to-game. I don’t know if they truly understand what they’ve done so far. Hopefully,
they get to finish the deal.”
Instead of getting caught up in the hype throughout the season, Brocious said the team has kept its focus strictly on soccer
and getting better each game. She believes the team’s commitment to the sport has driven them to success.
“We watch it together and we really love it,” Brocious said. “Every game we come out, we’re having fun. We’re having fun
together as a team and that’s how you don’t get complacent, because you truly love what you’re doing.”
“This year, everyone just loves each other,” Kelli McGroarty added. “There’s no drama. Everyone’s just here, happy for
each other and everyone wants to be here. It’s something you take for granted when you don’t have that.”
McGroarty, Brocious and fellow captain Riley Tiernan know how to get the team re-focused ahead of a big game. In the team’s
last practice before the Toms River North game, Brocious came up with a meditation drill to help the team relax following a
crazy, 2-1 overtime win over Shawnee in the sectional semifinals.
“We had a couple of close games, so we needed to just relax and take a breath,” Brocious said. “We decided to do a little
meditation. I made up the drill in gym and we decided to just relax and have a laugh. Right after that, we got right back on the
field, built each other up again, and had one of the best practices of the year.”
“They get it,” Jamie McGroarty said of his three captains, including his daughter Kelli. “They’ve been around the program.
Kelli especially has been around it since she was a little girl. But they understand the way they were treated when they were
freshmen, the right way to treat the young underclassmen and how important chemistry is. They bought into it and when your
leaders buy into it, it carries through the whole program.”
The Vikings were in command for much of last Thursday’s game, grabbing a two-goal lead over the Mariners 20 minutes in
and not allowing Toms River North to get many quality scoring chances late. The result was completely different from what
Kelli McGroarty and Brocious experienced three years prior, and while the team is still focused on its ultimate goal of winning
a state title, the senior took some time to savor the moment of lifting up a trophy in the final game on her home turf.
“I remember my first game here,” McGroarty said. “(Brocious) and I have been here four years. Being able to win our first
game here and end on a win too is a great feeling.” 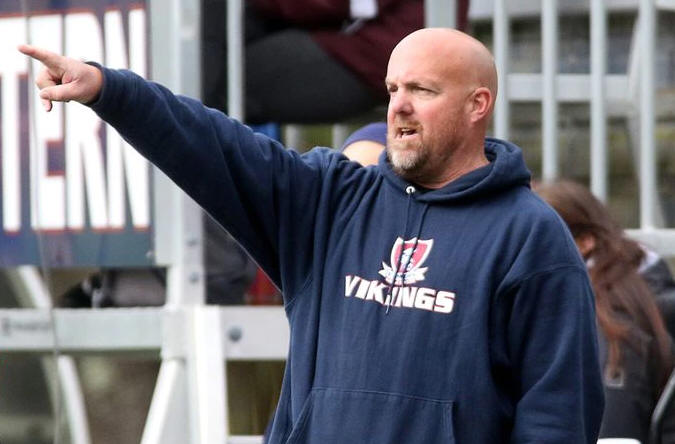